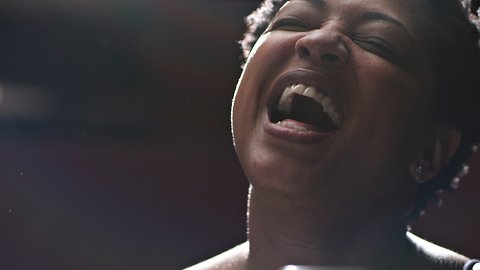 [soundcloud url=”https://api.soundcloud.com/tracks/211231824″ params=”auto_play=false&hide_related=false&show_comments=true&show_user=true&show_reposts=false&visual=true” width=”100%” height=”450″ iframe=”true” /]
Lisa Fischer is a singer who really gets around. Her life is an endless round of planes, trains, and automobiles, rehearsals and fittings. On tour with the Rolling Stones, Sting, Chris Botti or Nine Inch Nails, her name may not be on the marquee, but she doesn’t care. She’s busy loving every minute of it. It’s easy to see why she works all the time: her astonishing range, her spot-on intonation, her mastery of the stage, the way her tone wraps itself around your heart and won’t let go, the infectious quality of her time feel: these things keep her on top of the list. But it’s the sweetness of her smile, her visible pleasure in watching her bandmates do their stuff, her glamorous-girl-next-door quality that make fans all over the world think she’s their own secret discovery (despite the fact that the YouTube version of her duet with Mick Jagger on ‘Gimme Shelter’ has millions of hits).
The rest of her resume is pretty impressive too: touring, recording, and music making with Tina Turner, Chaka Khan, Beyonce, Dionne Warwick, Dolly Parton, Bobby McFerrin, Alicia Keyes, Lou Reed, Louie Vega, Aretha Franklin, John Scofield, George Benson, Laurie Anderson, Lee Ritenour, Jackie Evancho (and many others). Along with many other top session and backup singers like Darlene Love, Merry Clayton, Patti Austin, and Judith Hill, “the greatest artists you’ve never heard of” (but whose voices are instantly recognizable), she’s featured in Morgan Neville’s Oscar and Grammy-winning 2013 documentary Twenty Feet from Stardom. In the wake of the movie’s critical and popular success, opportunities abound. Lisa’s been recruited for new studio projects including Billy Childs’ long-awaited Laura Nyro tribute. Lisa, Darlene, Merry, and Judith sang the National Anthem at the 2014 Rose Bowl. And Lisa’s putting together a brand new band to explore some uncharted territory. She’s on to a new leg of the journey, destination unknown.
When Lisa Fischer won her Grammy for Best Female R&B Performance for her hit single “How Can I Ease the Pain,” in an unlikely tie with Patti LaBelle, she almost missed the chance to take the stage and accept her award. Thrilled and amazed to get the nomination, Lisa heard Patti LaBelle’s name announced and started clapping so hard that she didn’t hear her own name called. Onstage, the two singers hugged and swayed together, caught up in the moment. Because Lisa Fischer didn’t just win a Grammy for her first solo single; she was also one of the backup singers on Ms. LaBelle’s award-winning song ‘Burnin.’
The first person Lisa thanked onstage that night was Luther Vandross. Lisa was a Marvellete when she first auditioned for Luther, who was to become her employer, her mentor, and her champion. She is honored to carry on his legacy, striving for excellence, taking care of business, getting up early, staying up late, showing up on time, letting the music take control, singing her heart out, night after night.
-lisafischer.com