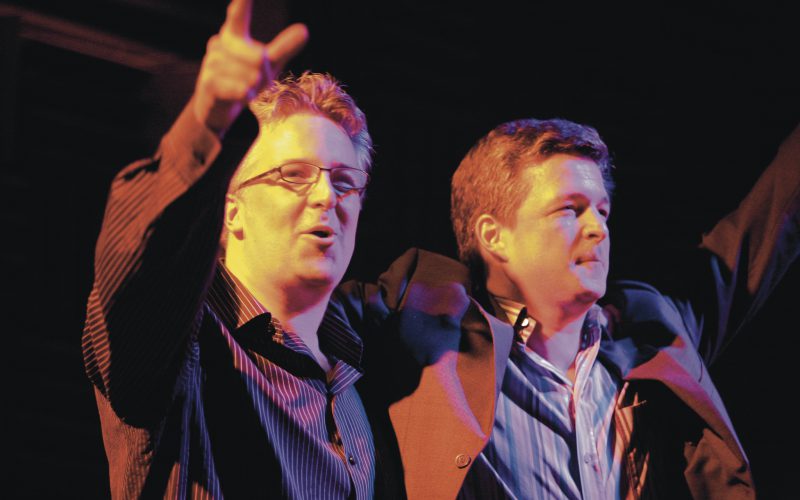 THE BREITHAUPT BROTHERS
Just Passing Through: The Breithaupt Brothers Songbook Vol. II  BreithauptBrothers PDF
Call them “modern standards.” The compositions of the prolific and terrific songwriting team of Jeff and Don Breithaupt are clearly modeled on the classic compositions of that golden age of songwriting represented in the Great American Songbook. Like such role models as The Gershwins, Rodgers & Hart and Cole Porter, these talented siblings devote themselves to the marriage of lovingly crafted melodies and well-honed lyrics, all arranged intricately, then sung by the cream of the crop of the pop and jazz singers of the era.
Don Breithaupt explains: “When Jeff and I started writing together, there were these albums by people like Rod Stewart and Natalie Cole, all doing standards written anywhere from 50 to 80 years earlier. We thought, ‘why isn’t anyone now contributing to that songbook?’ We just thought it’d be fun to come up new material in that vein, and we deliberately used those building blocks.”
”Twelve years of creative collaboration on this concept has now come to full fruition on Just Passing Through: The Breithaupt Brothers Songbook Vol. II. This sparkling new album features a star-studded cast of A-list Canadian vocalists putting their own distinctive stamp on carefully selected material written by the brothers B.
Just check out this elite crew, featuring many Grammy and Juno Award winners, platinum-selling and internationally acclaimed artists: Kellylee Evans, Denzal Sinclaire, Emilie-Claire Barlow, Ron Sexsmith, Jackie Richardson, Heather Bambrick, Marc Jordan, Paul Shaffer, Sophie Milman, Laila Biali, Sarah Slean, Monkey House, Patricia O’Callaghan,
Ian Thomas, and Tyley Ross. Whew!
Don Breithaupt is quick to stress that “this isn’t just one of those ‘special guests’ compilations you see out there. We have been working with a lot of these people for almost the whole period of our collaboration. They have often done other songs of ours live. We have worked very hard at getting the right voices.
“The danger in writing torch song-style material is you end up with too many piano ballads. We were adamant about having at least a half-dozen mid-tempo or fast songs on here. It was so much fun inventing the arrangements and customizing things to the singers. Much of the material was jazzy and theatrical originally, but you wouldn’t put Ron Sexsmith in that setting. So we invented this bubbly acoustic version of what was originally a jazz ballad for him to sing, adding some western guitar.” The result is the delightfully tender “Any Day Now.”
On “Missing Me,” Sarah Slean reaffirms her mastery of the pop-cabaret style on a tune that incorporates gently swelling strings, haunting trumpet and fluent, almost classical piano to sublime effect. Equally gorgeous is Emile-Claire Barlow’s breathy and subtly nuanced take on “Between Me And My Heart.” Light relief is provided by Paul Shaffer’s boisterous version of “Bad Influence,” a very funny horn-fueled ode to a man happily caught in the tender trap —”you’ve got me eating vegan instead of crap.” More sonic variety comes via “Where’s Mantis Evar?,” a cool Steely Dan-inflected track from Monkey House, the acclaimed Toronto combo led by Don Breithaupt. These are just a few highlights on an album devoid of lowlights.
New York City has also been seduced by the charms of the Breithaupt Brothers. In 2009, they took the city by storm with their musical Seeing Stars, which earned standing ovations during its sold-out run at the New York Musical Theatre Festival. Similar enthusiasm has greeted multiple Breithaupt Brothers Songbook revues at the famed Joe’s Pub venue featuring such stars as Tony winner James Naughton, Grammy nominee Kate McGarry, Kelli O’Hara, Carolyn Leonhart, and Janis Siegel. Fittingly, Joe’s Pub was the  host the U.S. launch of the new album, on Sept. 30.
Jeff Breithaupt has actually been living in the Big Apple since the mid-nineties. There, he crossed paths with Paul Shaffer, a connection that instigated the coup of enlisting the legendary Letterman foil for a rare guest appearance on the album.
Don, meanwhile, recently relocated to Los Angeles from Toronto, and is now in great demand there as a composer for film and television. Fortunately, the brothers are well-accustomed to long-distance collaboration, and songs are regularly being added to the Breithaupt Brothers songbook.
Expect more projects to be cultivated from that fertile source. For now, relax and enjoy Just Passing Through, an album you’re sure to want to have stay a while.
US release is on September 2, 2014
Canada, September 9, 2014
International September 26, 2014